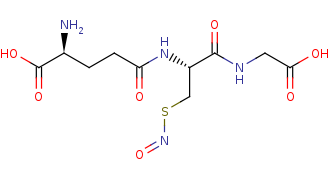 Show Activating Compound (3 entries)
1.1.1.1
ADH3-mediated alcohol oxidation is promoted in the presence of S-nitrosoglutathione
697214
-
3.1.4.35
stimulation of isoform PDE5 phosphorylation and activity, resulting in increased levels of cGMP in gastric smooth muscle cells. Concurrent activation of cells with acetylcholine augments stimulation and attenuates cGMP levels
678974
-
4.6.1.2
stimulates the enzyme activity via NO production, stimulation is inhibited by acetylcholine
693819
-

substrate inhibition above 5 * Km, enzyme is covalantly modified. Treatment with dithiothreitol, but not with ascorbic acid, rescues the activity
724714
-
1.1.1.184
treatment leads concentration-dependent S-glutathionylation of cysteines at positions 122, 150, 226, 227. Residues C226/C227 form a disulfide bond. Treatment results in a 2â5fold decrease in kcat with menadione, 4-benzoylpyridine, 2,3-hexanedione, daunorubicinand 1,4-naphthoquinone, with concomitant increase in kcat for substrates containing a 1,2-diketo group in a ring structure. Except for 9,10-phenanthrenequinone, all changes in kcat are at least in part compensated for by a similar change in Km, overall yielding no drastic changes in catalytic efficiency
724718
-
1.1.1.21

4 entries
2.7.1.1
hexokinase is particularly susceptible to protein structure modifications when exposed to even low concentrations of S-nitrosoglutathione. Biologically relevant [S-nitrosoglutathione]/[hexokinase] causes a significant decrease in Vmax with glucose (but not with fructose), along with oxidation of 5 Met and nitration of 4 Tyr. Preincubation of hexokinase with glucose abrogates the effect of S-nitrosoglutathione whereas fructose is ineffective
671283
-
2.8.1.1
dithiothreitol prevents enzyme inhibition and fully restores enzyme activity
645521
-
3.1.3.11
GSNO, the chloroplast FBPase isoform cFBP1 is efficiently S-nitrosylated in vitro. GSNO inhibits the FBPase activity in the mutant C173S/C178S but not in mutant C153S. 0.02 mM GSNO produces a 75% activity inhibition in the mutant C173S/C178S, compared with the nontreated protein, S-nitrosylation of FBPase mutants in the Cys of the redox regulatory domain
752149
-
3.1.3.48
S-nitrosoglutathione treatment decreases the catalytic activity parameters of PtpA by half
728979
-
3.4.22.2
inactivation of papain by S-nitrosothiols is due to a direct attack of the highly reactive thiolate Cys25 in the enzyme active site on the sulfur of S-nitrosothiols to form a mixed disulfide between the inactivator and papain
652012
-
3.4.22.56
0.1 mM, complete inhibition
647609
-
3.4.24.56

-
651334
-
4.4.1.5
glyoxal I activity in cells decreases rapidly within 30 min and reaches 10% of the control level within 2 h, activity returns to approx. 80% and 70% after removal of S-nitrosoglutathione or incubation with dithiothreitol, respectively, released NO inhibits glyoxalase I by reversible modification at a critical thiol residue, inactivation is reversed by reducing agents
649677
-
4.4.1.5

2 entries
5.1.1.18
GSNO, inhibition of human serine racemase by S-nitrosylation at Cys133, Cys128,and Cys269. The time-course is markedly biphasic, with a fast phase associated with the reaction of Cys113. The inhibition results from a conformational change rather than the direct displacement of ATP. Effect of nitrosylation on the cross-talk between ATP binding site and active site, both ATP and glycine bind to their respective sites with the same affinity regardless of the nitrosylation state
747202
-
6.3.1.2
isozyme MtGS2a activity is inhibited by thiol residue nitrosylation
728509
-

Links to other databases for S-nitrosoglutathione