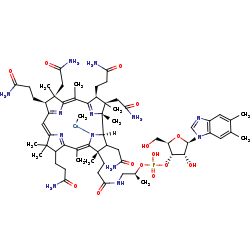 Show Activating Compound (1 entry)
2.1.1.13
the addition of 0.05 mM methylcob(III)alamin to the crude extract results in an about 6fold increase in activity which is not greatly affected by the addition of cytochrome P450 reductase or reductase domain of neuronal nitric oxide synthase
703638
-

Links to other databases for methyl-cob(III)alamin